Yes, that’s Radcliffe Camera, an utmost iconic landmark in a city peppered with iconic landmarks – but don’t be mistaken, the building with its circular leaden dome and cupola is a library. The word camera simply means ‘room’ and has absolutely nothing to do with filming devices or movies. Radcliffe is the last name of royal physician Dr. John Radcliffe who left a large sum of money to build this first circular library in England which was opened in 1749. Which means that Radcliffe does not refer to an actor with the same last name, frequently starring in Harry Potter films. My friends tell me that Radcliffe Camera today is the reading room of the Bodleian Library and right that moment some eager reading-beavers nonchalantly leave the distinctive building – wouldn’t everybody just love to tackle his reference works under the lofty dome of Radcliffe Camera?! 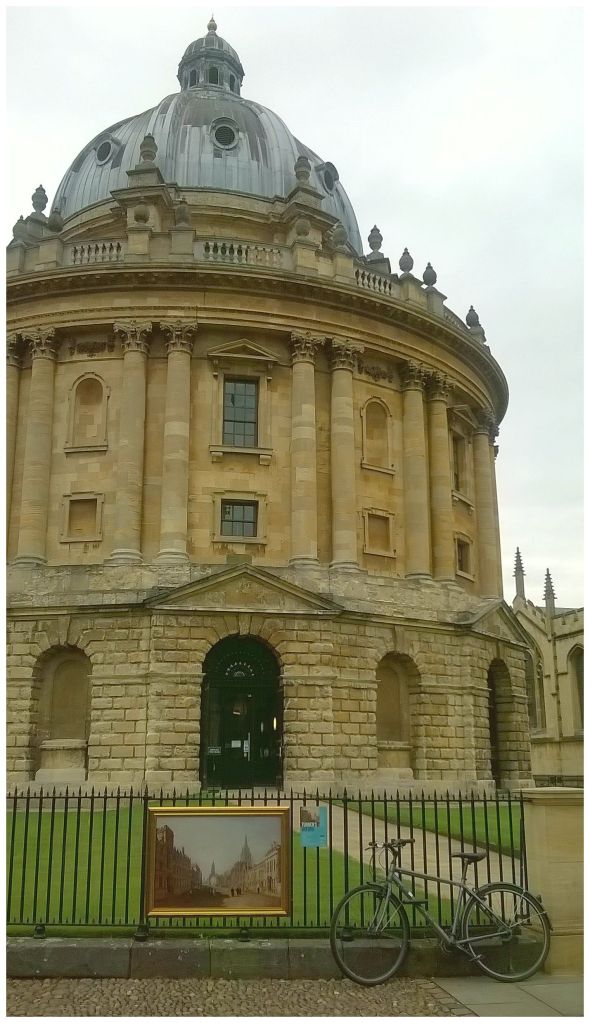 Reading under an 18th century dome may sound like an extravagant adventure but beware, unsuspecting reader, do not tip your library chair backwards on a floor which spans a subterranean cavern! Looking at the noble building, you find it quite unimaginable that beneath the solid stonework, the northern lawn and the picturesque cobblestones Radcliffe Camera holds some 600,000 books. This underground bookstore of two floors, complete with a tunnel which links Radcliffe library with the Bodleian, was constructed from 1909 to 1912. So, tread carefully, you’re treading on printed wisdom! 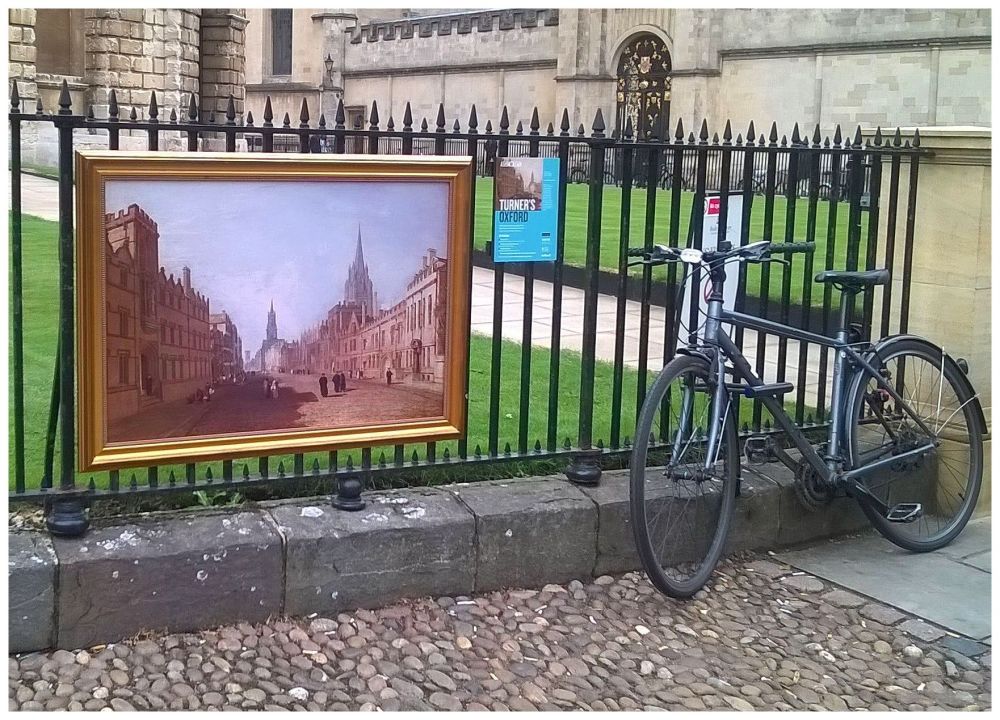 The artwork you see fastened to the fence in front of Radcliffe Camera shows an Oxford street scene in misty golden afternoon light and is a replica of JMW Turner’s painting The High Street, Oxford. Having walked down High Street just an hour ago you cannot believe that the painting is from 1810 and you agree with your friends that Turner’s view of High Street seems nearly unchanged after more than two centuries. Just forget some few traffic signs or modern vehicles, especially the omnipresent bicycles leaning against fences, walls, gates… 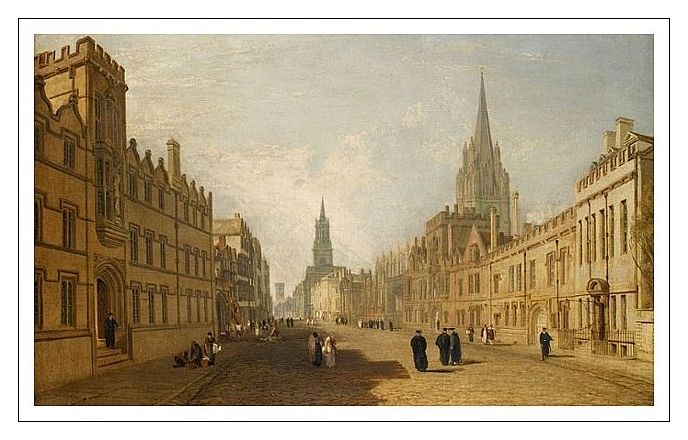 Turner’s The High Street, Oxford had been on loan to Oxford’s Ashmolean Museum from a private collection since 1997 but recently it was left to the British nation in lieu of inheritance tax. Its immense value of £3.5 m turned out to be more than the tax due:  Ashmolean needed to raise £860,000 if it wanted to keep the painting. Luckily, the museum was granted the enormous amount of £800.000 from Heritage Lottery and other funds, but for the remaining £60,000 it had to launch an exceptional fundraising campaign to turn residents and visitors of Oxford into a ‘Turner state of mind’. Over the summer, the famous painting  was on prominent display in the entrance space at Ashmolean Museum and additionally, twelve full-size reproductions of The High Street, Oxford were installed all over the city. The response to the campaign was extraordinary so that in just four weeks the target was reached. 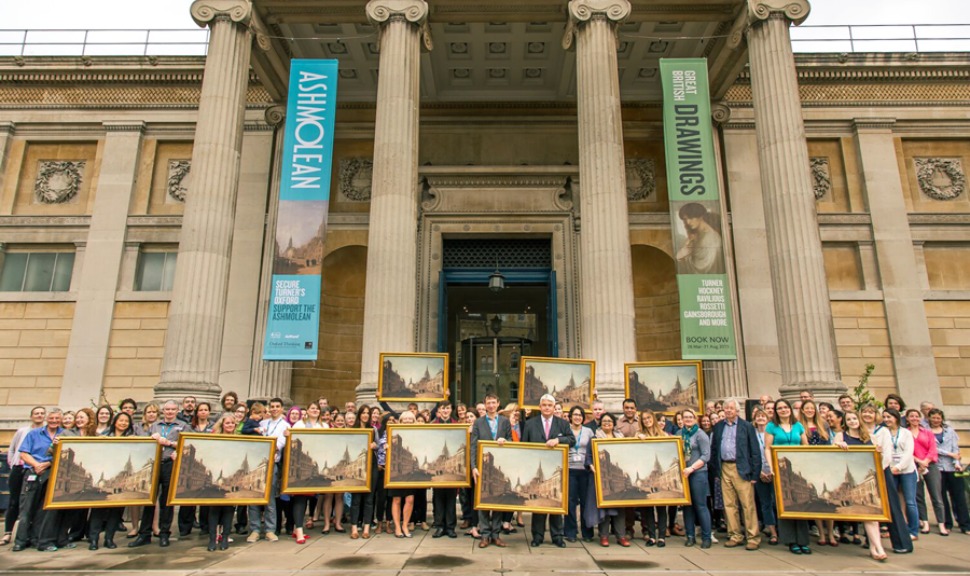 Look at the proud people holding up their Turner on the day when High Street, Oxford belonged to the city for ever and let their spirit pass over! Says Dr. Alexander Sturgis, Director of the Ashmolean:

“The museum has been overwhelmed by public support. With well over 800 people contributing to the appeal, it is clear that the local community, as well as visitors to the museum from across the world, feel that this picture, the greatest painting of the city ever made, must remain on show in a public museum in Oxford”

In September my friends sent me this photo of Turner’s High Street, Oxford, welcoming refugees to Oxford! 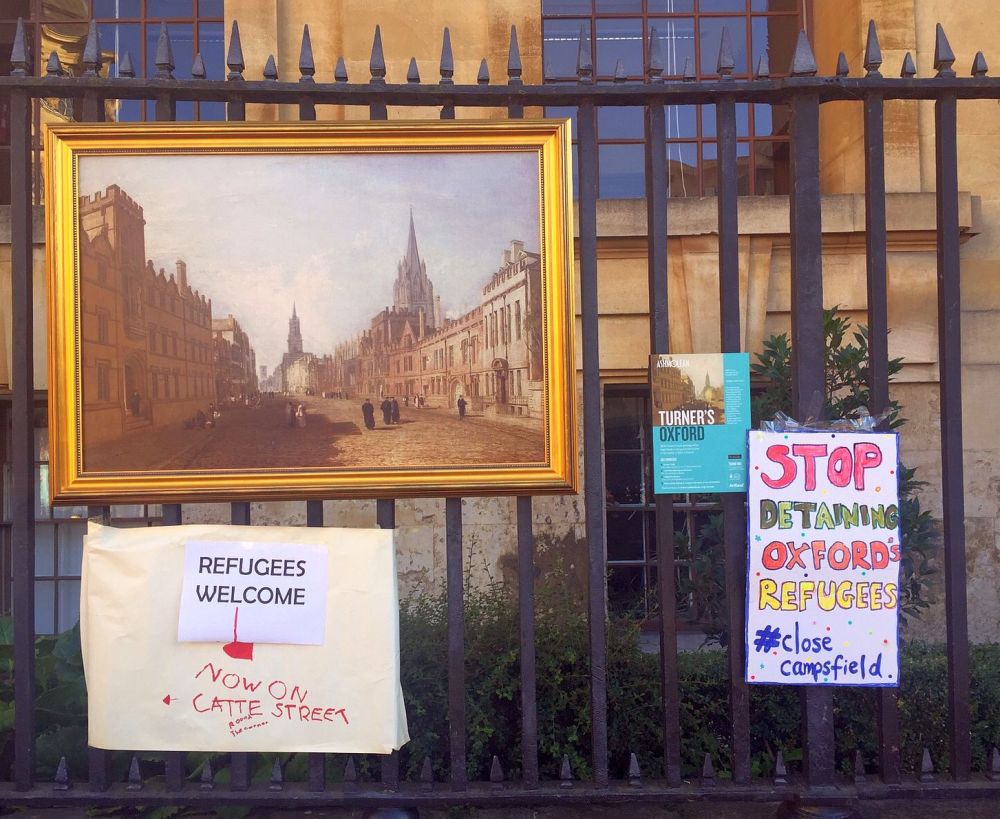