“… Eritrea is one of the most secretive countries in Africa. For those who have a hankering for off-the-beaten-track places, it offers challenges and excitement aplenty, with a unique blend of natural and cultural highlights…” (www.lonelyplanet.com/Eritrea 2016)

It is not law that rules Eritreans – it is fear…

“When I am in Eritrea, I feel that I cannot even think because I am afraid that people can read my thoughts and I am scared…” (Witness to United Nations Report, June 2015)

On the Horn of Africa the England-sized country Eritrea is no war zone. But from a population of about 4.5 million the number of refugees who risk the dangerous crossing to Europe is the second-largest after Syrians. About 5,000 each month (UN estimate), flee Eritrea and  set out on the world’s deadliest migrant trail across the Sahara and the Mediterranean Sea. They run away from a dictatorship that is targeting its own population with torture – including sexual torture – mass surveillance and indefinite forced military service which amounts almost to slavery.

“Faced with a seemingly hopeless situation they feel powerless to change, hundreds of thousands of Eritreans are fleeing their country (…) In desperation, they resort to deadly escape routes through deserts and neighbouring war-torn countries and across dangerous seas in search of safety. They risk capture, torture and death at the hands of ruthless human traffickers”, the UN report describes the refugees’ dire perspectives.

At an exhibition – in a safe place many countries away from Eritrea, Sudan and Libya – I try to understand the desperation of those young Eritrean adults who have braved the terrible trek and, for today’s open-house visitors, have visualized their odyssey with packing paper, cardboard, thread and coloured crayons on a large green wall in a German refugee accommodation. After a while I turn my back to the illustration of their past experience and join them in the sunny yard for a very special coffee ceremony.

Hi, have you been to Syria? I know, my home country is  #1 on the list of dangerous places on the planet, so you can’t go now and you shouldn’t. When cutting out this colourful refugee map from my shattered memories, I  tried to imagine Syria before it descended into infernal civil war. I heard my uncle speaking to me from the distance of several countries and he said: “Believe me, boy, Syria, and its cities in particular, were tolerant and peaceful places. Damascus and Aleppo, which are among the oldest, continuously inhabited cities on earth, used to attract visitors from all over the world. For ages and ages, various religions had been respected here. People of different faiths shared public spaces like coffee shops, art galleries, hammams, and you couldn’t tell who was Muslim or Christian, Sunni or Alawite, Kurdish or Arab. Families loved to be outdoors and had picknicks alongside ancient Roman ruins like Palmyra or close to The Crac de Chevaliers or in sight of the waterwheels of Hama. They cheerfully promenaded through souqs, buying ice creams or sweets at Damascus’ Souq al-Hamidiyya. Does that sound like paradise to you? It was, my boy, believe me! ”

I listen to my uncle but I don’t remember such pleasures. My family is torn apart, in fact, my entire community has fled to safety. All those foreign countries I passed through, afterwards I could barely identify them, and mapping my escape from Syria was tiresome. But now I am proud of my work, of my refugee map. I follow the line of the thread back to Syria, listening to my uncle and  his treasured memories of peace in Syria.

British Museum – Let’s look into the future and share dreams!

Every single one of the more than 5 million visitors who enter London’s British Museum each year, will set his feet on the marvellous white floor tiles of the inner courtyard.  Yet, he will not look down to the floor but lift his eyes to the incomparable grandeur of the Great Court and the shining glass-made sky above. His view is magically drawn to the two majestic staircases which graciously encircle the magnificent cylinder of the former Reading Room. Step by step, the stairs lead his eyes upwards to take in the kaleidoscopic light from the miraculous roof which spans the inner court like a giant sail in the wind. It’s more than a museum, it’s a unique public square and an irresistible cultural domain – open to all and to be used by everyone! When after a while of browsing and grazing the mesmerized visitor can finally spare some time to take a look at the floor, he may find in words what he has already sensed as a unifying idea of the Great Court and the British Museum:

“And let thy feet be set,

In midst of knowledge…”  Tennyson

So, let thy feet…

…regardless of shape, size or gender of feet, color of toes, eventual smells,

… regardless of origins or boldness of shoewear, strange behaviour of socks and tights,

… and even regardless of feet being overtopped by hairy calves,

… be set in midst of knowledge!

At the very latest, people should start in 2016 – just one week hence – and set their minds firmly on respect of humanity and peace. And why not try and do it together: Happy New Year, particularly to the school children at Neve Shalom – Wahat-al-Salam!

As a countdown to its 400th anniversary in 2021, the University of Oxford Botanic Garden and Harcourt Arboretum is presenting 400 plants of scientific and cultural prominence. Since November 24th 2013 such a plant has been highlighted every week. Common Ivy, scientifically named Hedera Helix, was the plant last week (107). What a marvellous choice!

We clip you from the rotting shed
And watch you metamorphose into festive decoration.
You take a solemn stance and cover, with eternal green,
A grave, a vault, a ruin and a littered backyard.

On winter and on summer days
You creep and climb and hold together
What time and waste has left:
A promise and a memory of blossom and decay.   (ch)

The sunniest public event in the aftermath of the atrocious terrorist attacks on Paris has been the united singing of the national French anthem at Wembley Stadium, when thousands of French and English football fans (including Prince William) were belting out La Marseillaise together with the French and English national football teams – with a lot of gusto, unflagging confidence and good humour. In an outstanding joint effort people let the sun of friendship shine brightly at Wembley Stadium.

Indeed, considerable efforts were needed to accomplish this heart-warming event. Get to know the words of the anthem, understand them and, biggest challenge of all, make the words sound French! I mean, it’s not god-given to a native English tongue to pronounce French words in a French way, is it? There’s a long tradition of learning French as a foreign language in the English speaking world, of course, and more than likely there are millions who have succeeded in doing so. But, this extremely extravagant French pronunciation is an encounter of the third kind – it  must surely have been concocted right during the Babylonian jumble of languages, obviously by some nasally gifted biblical scholars ! So, first and foremost, a legible phonetic transcription of the anthem was needed. But  would anybody be able to rip the French sounds from the freedom-spirited words of La Marseillaise? “Aux armes, citoyen” – “To arms, citizens” – how could anybody sound-doctor these eternal words of resistance into a good English read?! A case of mission impossible, I thought, an unfeasible feat to chip away  the phonological body from its orthographical sibling.That’s what I thought until, suddenly, out of the blue, a twitter message popped up: It was India Knight’s sweet-lettered soundtrack of the first verse and chorus of La Marseillaise. Here it is again, quoted for everybody to delight in: 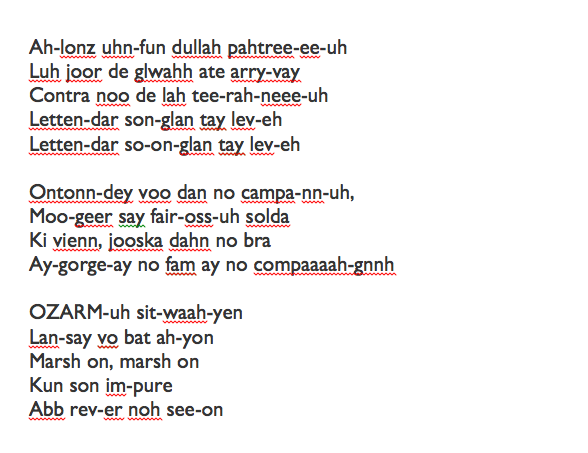 And here it is, too, for private use to light up one’s low spirits (“Allons enfants…”) or for public use to stand together as citizens (“Marchons, marchons…”). As, for example, at this weekend’s Premier League matches when La Marseillaise is being played as a gesture of solidarity and remembrance. With 72 French players in the Premier League and its firm friendship to France it feels just right to hum along with the melody of the Marseillaise or even join in with the chorus: OZARM-uh, sit-waah-yen! Join in with the arms of friendship, citizens!

Be free and stay together – like the Primary School children at Wahat al-Salam – Neve Shalom!

You are, honey and spice!

You are, all made of clay!

(from Esther and Christine for the English learners)

And that’s where the school children play together: Under the rainbow on Little Lady Loris Purple Playground of Friendship! By the way, the whereabouts of the first “P” in purple are unknown. But everybody has made peace with the fragment “urple” and, anyway, it looks and sounds a lot more colourful than purple. Hopefully, the “P” doesn’t feel too lonely somewhere far away from the playground of friendship and Little Lady Loris’ rainbow.