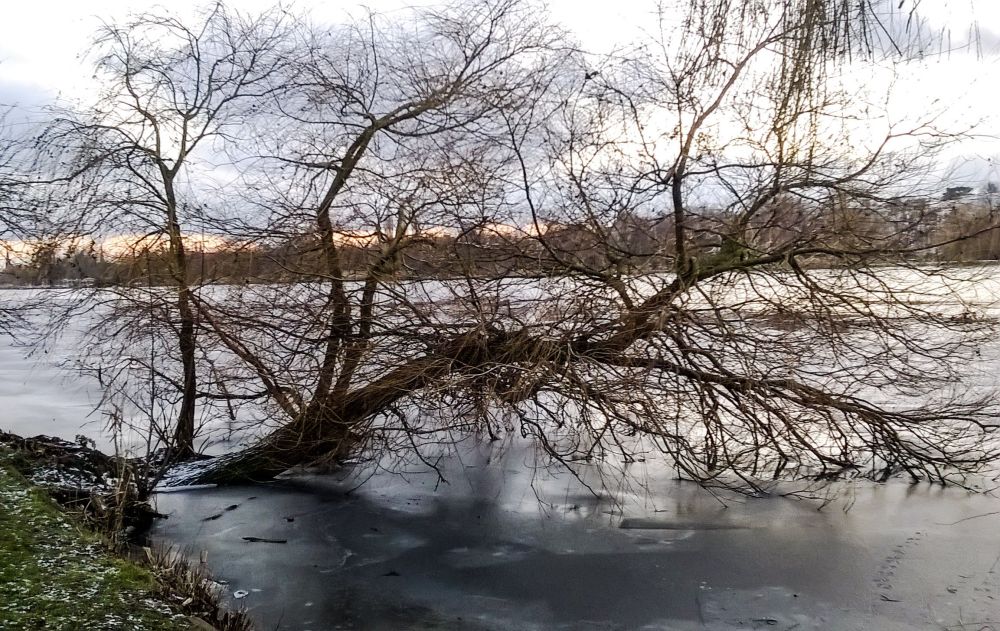 Taking a walk in January, I look at the world in wonder: Everything – except people – holds still and wants to be noticed. Like the frozen willow tree which is laid back against the icy surface of the lake similar to an artist’s naked model on a blue divan.Through the elfish branches and twigs of an alder tree with its hundreds of small, brown cones I look at a pale half-moon which is already up before sunset. The moon is moving slowly and time is sheltered in a winter capsule. No ticking away of time units, ducks keep silent, wind has long blown away the tiny seeds of the alder cones.

January has space and freedom.Those twelve months of the year are spread out before you like an uncharted continent to explore and to map out.

January makes you imagine spring colours and speculate about weather reports of  summer days still to come. Where to travel, what to read and when to dance! Your unspoken plans meander from improving your finances or your wardrobe to refurnishing the kitchen and from there to getting hold of a ticket for a concert staging Sir Simon at the piano, accompanying his mezzo-soprano wife, yes, at the piano!

In January you will take out your opinionated ear plugs and be all ears to the world again – even to politicians and other prepotent people in charge. Again, it’s January unplugged!

But one day – most certainly the 22nd – all of a sudden and out of the blue, some chrono-addicted, unrelaxed, hyper-disciplined supermiser will stick a new year’s annual calendar right into my contemplative life and I’ll gasp: “God gracious, it’s January 22nd! Already!”

Suddenly, I will remember meeting my neighbour in the underground parking space and hear him answering to my new year wishes: “Don’t know about new year. To me it’s already over, had my birthday on January 1st!” Poor fellow citizen, to be confronted with his annual calendar right on the first day of January, year by year! No timeless moments in January, no unplanned visions of colour and change!

And while I am hastily scribbling down my overdue to-do list right into my brown leather agenda, eagerly restoring chronology of time, an image pops up in my mind. It’s showing what I had in my handbag when I rode the coach from Oxford to London. I saw, I considered, I whispered:

“Tell me, Chronos, when is the moment to write about women’s handbags and their contents?!

IF AT ALL, IN JANUARY! Hurry up!