The Ox and the Ford

After an exceedingly pleasurable breakfast at friendly Oxfork’s we set off on an Oxford walking tour which first takes us to the Thames path opposite the boat houses,”along the reedy shore of silt and mud”, and next to the oxen. We meet the mighty bull in form of a good-tempered English longhorn on the vast green meadows of Christ Church College. 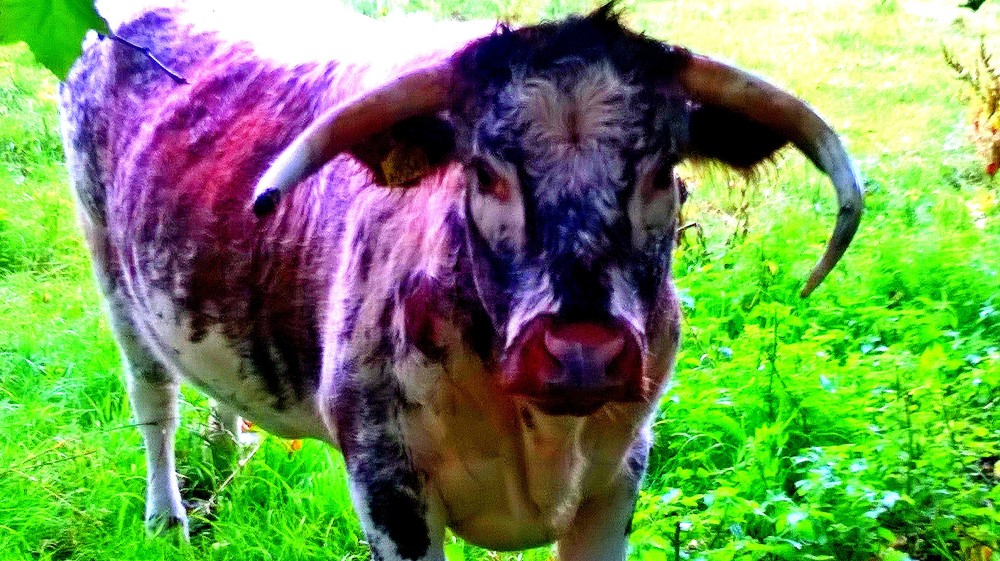 Eyeball-to-eyeball with a Christ Church longhorn!

Even an intrusive Spanish selfie stick cannot disturb the oxen’s spirit of pastoral holiday on Christ Church Meadow, which is for sure the most cultural pasture in the whole Commonwealth. Still, you may detect a stubborn bewilderment in the beast’s cocked head as the selfie stick is getting too pushy.

English longhorn not being amused about Spanish selfie stick

You count some 9 cows which all belong to the small herd of Christ Church College and are allowed to enjoy their famous pasture without labor or the prospect of being turned into food for the college students some day. In turn, they please native Oxonians, students and tourists alike with their friendly cow manners.

Nowadays, everybody knows that Oxford’s name derives from the Anglo-Saxon ‘Oxnaforda’, which means “a ford for oxen”. The Middle English version, ‘Oxenford’, was shortened by time and use to Oxford. The latinized form is Oxonia, something worthwhile knowing in such a learned place! Later, I am allowed a glance at Oxford’s coat of arms and ready to despair at such a gaudy masquerade of (1) a star-spangled black elephant in chains, (2) a Bavarian-tailed, grim beaver with a crown round its neck, (3) a suit of armour bereft of its knight, and (4) a happily grinning lion with a crown on its head, and holding up another coat of arms! Not to speak of (5) all those flowery feathers and trestles which are seaming in the puzzling parade and, not to forget, (6) the Latin inscription! But wait – there is my English longhorn from the meadow, my friendly oxen! 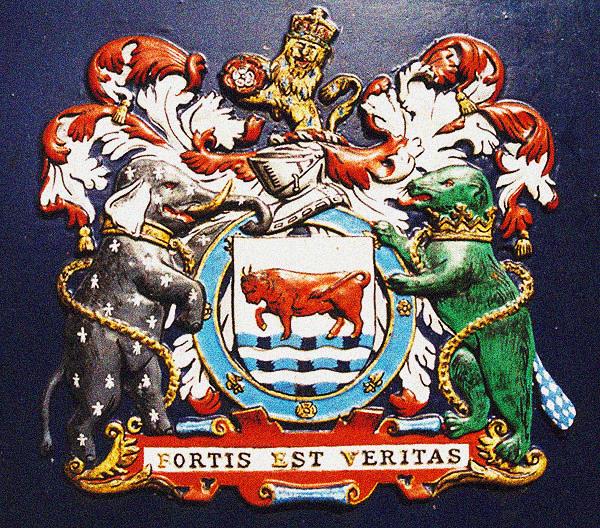 The Oxen and the River

Right in the heart of pomp and circumstance, in the clear and simple square of the circle, you find the answer: In the beginning there were a river and a bull! Fortis Est Veritas. Strength is in Truth. And now let others tell the rest of the story!

Obviously this all has to do with cows, I think to myself under my tartan-coloured umbrella on which the rain patters persistently.  Why was an oxen so important that a city was named after it?  Weren’t there any geese, swine or sheep at the crossroad of River ‘Thamesis’ or ‘Isis’ and  River Cherwell? But can you imagine Oxford having risen to historical immortality by the name of Swineford, or Hogsford, argues my friend. Just unthinkable, I admit, and I faintly remember a German city by such a crude name. Although – not every school – even if it were a school of witchcraft – having a ‘hog’ in its name is doomed to being infamous.Or is it? Nor will it be banned from honorable Christ  Church College, which – founded back in 1524 – is surely the most famous of  Oxford’s ancient colleges. I wonder which kind of weather inspired  the poet to name Oxford the City of Dreaming Spires. This Monday the spires of ancient Christ Church are definitely dreaming of sunny spells midst all the hanging clouds and rain! The incredibly beautiful buildings have had numerous appearances in film and on TV. The impressive entrance way, for example, is familiar to anyone who has seen the movie Brideshead Revisited,  and its incredible dining hall has been glamourised as Hogwarts Great Hall in a series of Harry Potter films. Beauty and Profanity are old acquaintances, so we’ll just wait and see who wins us over this time!

The term hasn’t started yet, so you aren’t distracted by any bespectacled, good-looking Harry-Potter-Clones on bicycles and younger visitors will fully concentrate on Potter Paraphernalia in the gift shop of Christ Church College. Deluxe Dobby face-mask anyone? But to be fair,  tourists also praise the true treasures of Christ Church College, as after a guided tour including “Dean’s garden, the cathedral, grounds, and the dining hall. Of course with brilliant explanations. If you don’t mind Christian Stuff” (quoted from trip avisor)!  “Christian Stuff” at Christ Church – it’s quite a surprise, isn’t?”

We are taking a new turn now, away from meadows and cows, to the city of Oxford. Let our view of the city be accompanied by the Turner painting “View of Oxford”. The artist is known by the name “Turner of Oxford” and he has his grave here. His landscape sketch shows Oxford taken from a higher point and inviting the visiting wanderer to enjoy with him the sight of some identifiable landmarks: The spire of St. Mary the Virgin, the Gothic twin towers of  All Souls College and the dome of  Radcliffe Camera – No, it’s not named after the actor impersonating Harry Potter! – And all the beauty is held by rosy sunset clouds and a wide, blue sky. We do hope to experience such a sunset later the day, as well!

“A view of Oxford” by W.Turner