‘Displaced’ – such a harmless, totally painless term. Safely tucked away behind this word are millions of repeated stories of uncountable separations from homes, land, family and friends. Manifold stories of uprootings which means moving to a relative or neighbour, dwelling in the shells of destroyed buildings or, ultimately, fleeing across borders to unknown places.

Whatever it is people carry along, it needs to take roots and give comfort at some other place so that you can recover with its familiar taste.

A picture of what I left behind pops into my mind  and stays there, sending circular waves of feelings. A leaf of apple-scented mint in a warm terracotta container, with some dry crumbs of root web which probably a bird has been pecking up. In the early hours of the morning I sit down with a plastic cup of tea which is strongly sweetened, exactly the way it should be. The children are still asleep in the dorm.

Let There Be Dinosaurs!

On this rainy day your first glance doesn’t fall on the lawn you are crossing but on the entrance of Oxford University Museum of Natural Science, the OUM, which is your friends’ favourite museum in Oxford and surroundings. They ardently assure you that there are few better ways to spend a day in Oxford than a visit to the OUM. Its holdings – which run into millions of specimens – include a gigantic Tyrannosaurus Rex skeleton and a stuffed imitation DODO which provided some of the inspiration for Oxford’s most famous child and book, namely Alice in Wonderland. But right now, your friends somewhat hesitate as if they were waiting for some kind of emotional reaction from you. What am I supposed to do, you think, and follow their eyes’ direction. You see them staring purposefully at the lawn and, politely you, too, turn your attention to the grassy visiting card of the famed museum. Well, the grass is green, even today, and all in all, the turf looks well-groomed which is exactly what you expect from such a prominent British lawn. But then you gasp in horror – one, two, no, a legion of irregular, large mud-holes are meandering across the turf right towards you. What the heck has happened here? Has OUM sacked the gardener and he took a cruel revenge?

Instantly you are set right! To talk of mud-holes when you actually, eh, at least spiritually, watch a dinosaur striding across OUM’s lawn – blasphemy! What you really see are the giant footprints of Megalosaurus, Oxford’s very own and very special dinosaur!

The fossils, including the Megalosaurus jaw, which is also held in the Museum’s collection, were found in a quaint quarry just outside Oxford. The ancient prints which today span the lawn in front of the museum are modern casts from the fossilised trackway that Megalosaurus bucklandii,  a three-toed carnivore, left some 166-168 million years ago when he roamed the lagoons of Jurassic Oxfordshire! You immediately fall in love with the muddy footsteps and enter the museum in high spirits.

The architecture of the place is breathtaking. Entering the main court, you first notice how very high and light the structure is, like the nave of an enormous gothic church, but relieved from the weight of stony pillars. Instead, the vaulted glass roof is held aloft by an elaborate system of cast and wrought ironwork, the modern building material of the 19th century. The slender pillars are artfully decorated with botanical ornamentation –  a fanciful iron jungle for Megalosaurus and his relatives!

It is reported that John Ruskin, famous builder of the Museum of Natural History, was so taken with the neo-gothic, ironwork architecture that he visited the new OUM every day just to admire the beauty of the place – such as people have done since then unto nowadays.

There are fierce animals and lovable ones! The OUM is free of charge and offers fabulous educational programmes, no wonder that the main court is brimming with voices and happy activities of children and parents. Similarly, the outstanding touch-and-feel areas are enjoyed by children and adults alike. Right at the entrance desk a ‘retired’ fox is so adorable that you want to stroke it as much as all the kids do! My friend relates the story of a girl who came for weeks and months just to give this fox his daily cuddle. Surprising, that the soft and silky coat isn’t worn down by all the petting 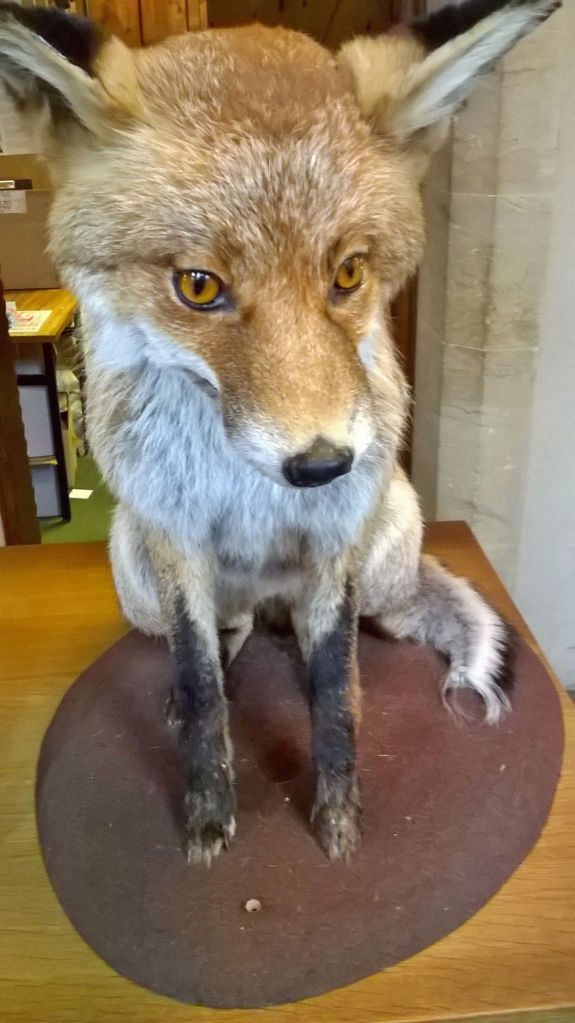 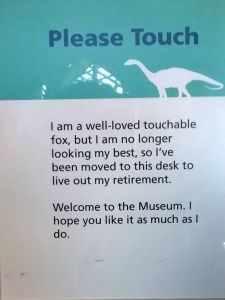 Spiders and columns with your carrot cake

The museum cafe is situated on the upper gallery which is overlooking the dinosaurs in the main court and which lifts your body and mind up into the spheres of pure bliss. Take a seat at one of the wooden tables along the stonework of the first-floor gallery  and admire the neo-gothic arcade and the column chiseled from decorative rock that is right next to you. Each of these columns, which are surrounding the court on the ground floor as well as the first-floor galleries, was made from a different kind of British rock. Each of their capitals and corbels are intricately carved with flora and fauna, beautiful lessons in geology, botany, masonry, art, history… and in inspiration. You could spend hours of inspecting the stones if there were not the big spider right next to your coffee pot. Don’t worry, she just wants to watch, I am assured, and I happily share the delicious coating of the carrot cake with my human friends, only!

Just before I get lost in the flatness of empty city lights a coloured sky bear waves me back to the urban livin’ room. Hi there!

I am home and in a mood of whistling a melody for the coloured sky bear.

Nouh is feeding his pigeons

At the end of the market day the streets of the shuk are covered with chunks of fruit and organic garbage – the daily mess  after the last sales have been made and the crowd is gone. Nouh has sifted through what can be used tomorrow again and stored away remaining merchandise. The men in the shuk have cleared the trash and heaped it up so that the dumpster can suck it in easily and remove the chaos. Then a stream of water will wash away Nouh’s work day.

Now, he is taking a break from the shadows of the shuk and goes outside to feed his pigeons with some remnants of the market day.

Nouh breathes the scent from the sea and welcomes his pigeons, the ancient and streetwise messengers of day and night.

After all those thousands of years Samson has finally got it: He can give in to Delilah’s friendly arts and skills. She will unfailingly restore his wonderful strength if he asks her to do so. She will pleasantly lull him to sleep on a comfortable divan and deal with his minor weaknesses discreetly.

And never again will she cut away seven locks from his head, but – in the blue hours of the day – she may gently massage his scalp, his neck or his feet with a well-scented oily extract. And never again will Samson have to fear his own rage. He can fall asleep innocently.

Dromedars and bright colours parade along the facades. And what is David up to? Looks as if he were redecorating his living room and airing his beloved carpets on the balcony. Their colors reflect in the streets. 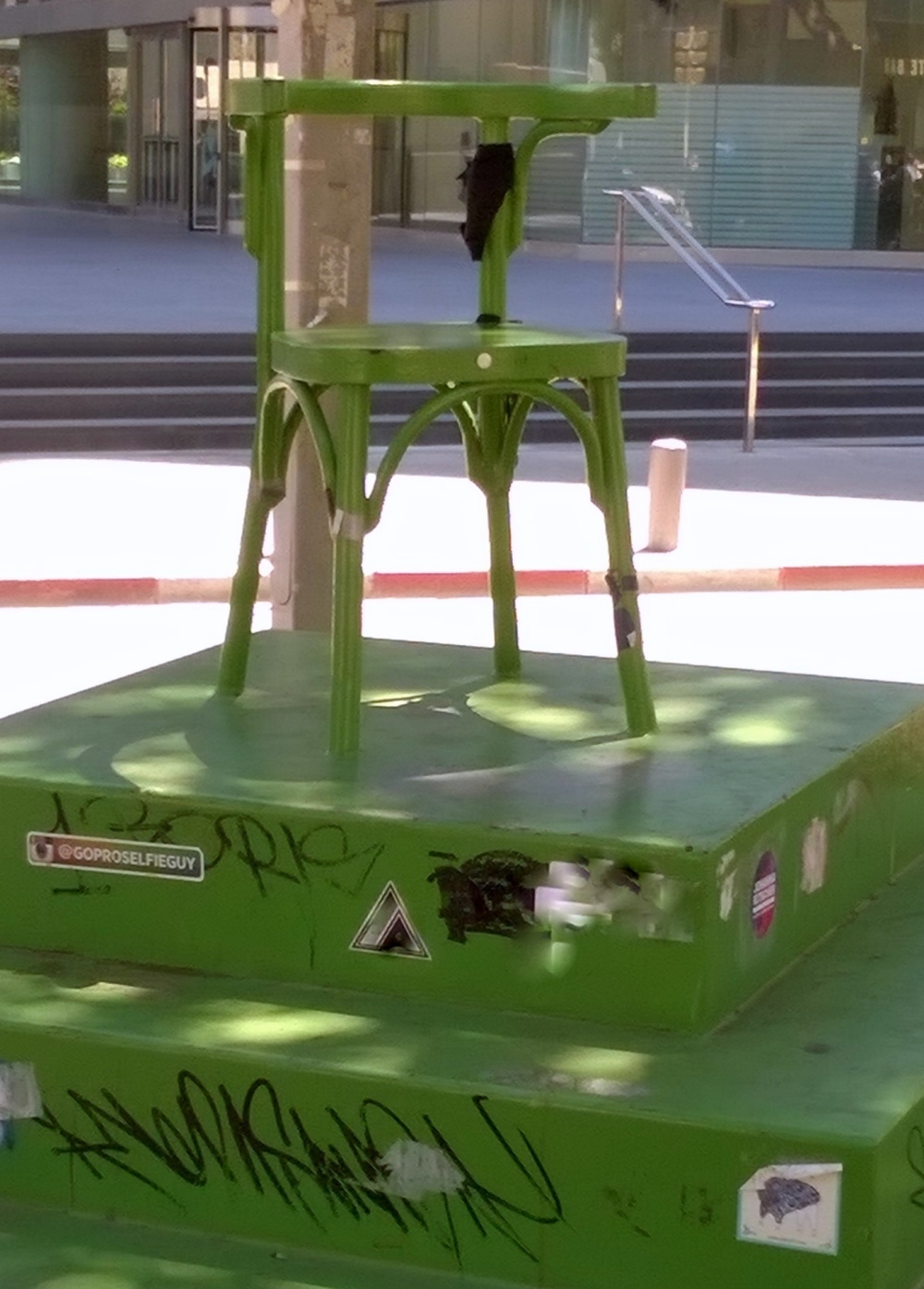 Rest. Listen to the leaves

Leave the grey stairs of Albuquerque behind,

And the yellow paintings of a treacherous woman.

Breathe, Yael, and climb the steps

To the high perch.

What kind of break do you need?

Pull out the nail, Yael, which you once hammered

Into your stories. Sit

And speak to somebody

Walking through urban space is such a dreamy, surreal experience. Nothing is tangible like fields are, or forests and rivers, as in the countryside or in the wilderness. In the city, there is nothing like the path you find yourself through the unbuilt space of nature, may it be cultivated, untouched, impenetrable. In urban surroundings there is nothing like the crystal reality of outside space which is a void and which you cannot enliven. Nobody can, that is  certain. Whatever image you throw against the creations of nature, it will fall back on you. The world will stay voiceless and  real.

Whereas in a city, you walk straight into a seemingly flat world of never-ending sensations. Nothing is real, dadi da – dada dada da. Here, in the sphere of human habitations, apart from nature, people are continually creating their own space. They do so by communicating with the urban objects around them, even though these are firm, usually immovable, and mostly from wood, stone, steel or any other kind of hardened material. Walking through a city, you can throw out your thoughts like a net into the urban landscape – casting your spell even on a heaven-assailing highrise –  and you will always haul in a miraculous catch of corporal, emotive space, just for yourself to breathe in. It appears to come from the objects which people co-habitate together with you and where they create their urban livin’ rooms in an otherwise empty nature. And even if you happen to get back freezing loneliness, it’s human and it has a voice. 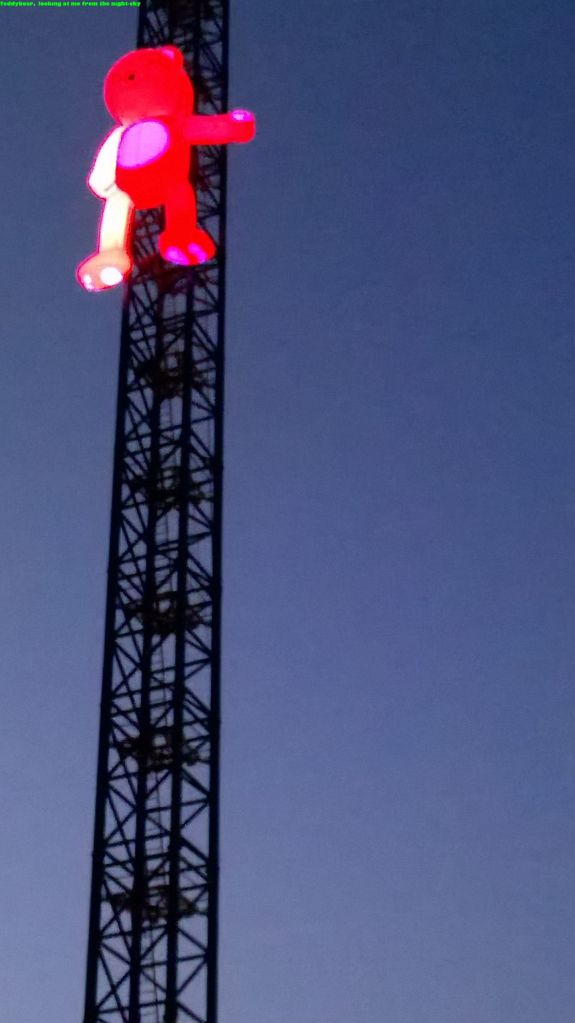 Teddy bear, waving to me from the night sky